“Although we have entered into a period that many would consider the final stretch in the fight to end HIV, we are still perplexed by the continuing increase in the rates of HIV among youth, and even more alarmed at the spike in the rate of infection among young Black gay men.

For many years, those of us on the frontlines have stressed the importance of Black gay men being at the forefront of intervention development, and the implementation of strategies aimed at reducing rates of HIV in Black communities. However, I have yet to see our voices fully included and totally respected. History teaches us that we are best suited to articulate and contextualize our lived experience that will ultimately yield the change for which we continue to hope.

Those of us who work and live within Black communities have been clear about the most effective strategic implementations, yet we face the persistent hurtles of resources diversion and a skewed focus on biomedical interventions.

We are alarmed—but not surprised—at what the statistics tell us about HIV among young Black gay men. We are devastated to know that our years of struggle to have our voices heard have once again been discounted and disregarded.

As we stand on the threshold of National Black HIV/AIDS Awareness Day/Month, I challenge us all to come to the center. Let’s consider what we are advocating and fighting for and then act accordingly.

At this phase of the epidemic, we are all needed. Young brothers are desperately needed to create and implement youth-driven interventions that exercise control over their own lives and the lives of their peers. Elders are needed, too. Those who have travelled these roads before possess invaluable knowledge and historic context that can be instrumental as young brothers develop and grow their critical aptitude.

It’s only when we all do our part—young, elder, those within Black communities, and those who seek to help—that we will begin to see the drop in rates of HIV among Black men that we so urgently seek. Let’s remember that this National Black HIV/AIDS Awareness Day.”

Our Love Is Worth Protecting. Activating Atlanta.

‘More than I imagined! King Day Week in Atlanta GA.’

When I arrived at the Atlanta airport the energy was high and the hospitality was incredible.
I jumped in the rental car and upon leaving the airport I was mesmerized by In The Meantime’s larger than life billboard: ‘OUR LOVE IS WORTH PROTECTING’. AMAZING! WOW!
I drove into the midtown area by Bull Dogs, one of the most popular watering hole in the ATL where I saw our billboard towering over the parking lot. Yes, ‘OUR LOVE IS WORTH PROTECTING.’ AMAZING! WOW!
I had not even made it to the hotel before I parked and jumped out the car and started talking to people about what they thought about the board. AMAZING! All positive and constructive comments. I had to ask myself, is this the dirty South or what?
Here are a few of the highlights/ goals set and achieved during my visit to Atlanta:

____________________
*Attended the NAESM Conference for a couple of days. NAESM is the nation’s only Black gay male focused HIV conference and thanks to the talented film director, Tim Daniels I interviewed and captured video footage of influential Black gay men from around the County.

*Dialogued with the Conference leadership about their plans to host next year’s 2016 conference in LA.
* Interviewed 30 people passing by the Billboards about their honest perspective of the testing campaign. 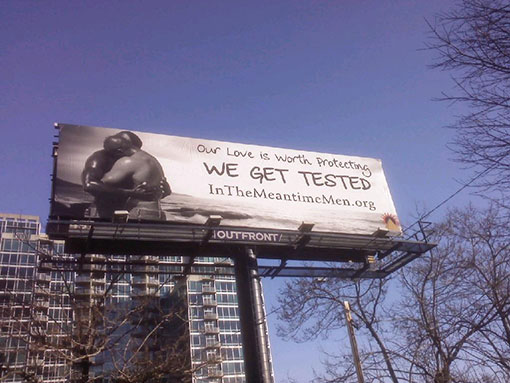 *Was most impressed with the Atlanta Impulse Group. They were an amazingly powerful group of young Black gay men who are LEADERSHIP in ATL for Black gay men. I felt very connected because I helped to advocate for this group to be developed. They are on fire!!
*Hosted a private dinner with 15 Atlanta based Black gay men to discuss the state of the Black gay male community in Atlanta and to answer the question, ‘What’s needed?’
Distributed, Message In The Meantime in various Club/ Social venues.
Managed to make two of the mega events hosted for thousands of Black gay men from around the County. More than enough…
Conducted outreach and condom distribution with my friend Ivan Daniel while networking with 4 of the nation’s leading promoters for Black gay men. We’ve got plans…”

I’m grateful to be home again. There is no place like ATL other than LA!

Both nationwide and in LAC , HIV epidemic is primarily Male.

Nationwide diagnoses of HIV among AA: 47%.

LAC diagnoses of HIV among AA: 21%  (AA represent about 9% of LAC population).

Both nationwide and in LAC AA are disproportionately affected by HIV.

Nationwide among males diagnosed with HIV in 2012 42% were AA.

Nationwide among females diagnosed with HIV in 2012 66% were AA.

Nationwide the rate of HIV among AA males is about 3 times as great as the rate among AA females.

In LAC the rate of HIV among AA males is 5 times as great as the rate among AA females.

Where can I go to get an HIV test or other resource information?

This billboard recently towered over the busy intersection of Santa Monica Blvd. and La Brea Avenue, the gateway to West Hollywood. In bold white letters against an all-black background, it offers a startling L.A. county statistic:

“One in three black gay men are infected with HIV.” Then, in even bigger letters, it asks: 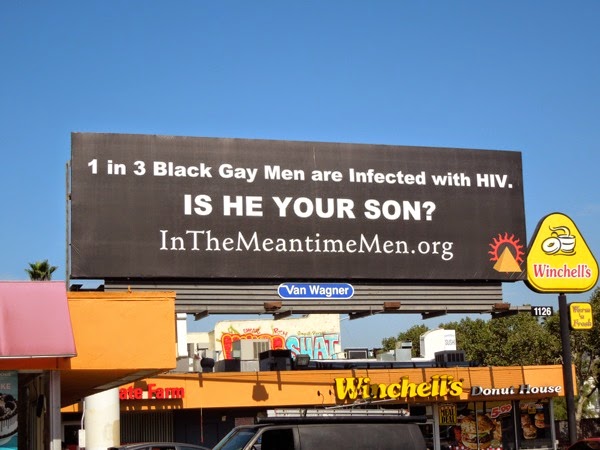 Click The Link Below To Listen To The Audio Interview with In The Meantime Executive Director and Other Community Members Sharing Their Views About This Billboard Campaign:

The billboard is an effort by a local nonprofit to spark a conversation that it says African-Americans – and especially black parents — too often sweep under the rug, with dire consequences. While HIV infection rates have stabilized or improved for most demographic groups, for young black men who have sex with men, they are getting worse.

“One in three gay black men. That’s the reality, based on the data that’s captured here in L.A. county,” said Jeffrey King, the man responsible for the billboard. He directs In the Meantime Men, a nonprofit that works with young black gays in an effort to lower their high rate of infection.

King said he chose the West Hollywood location for the billboard because more and more young African-American gays are frequenting that city’s clubs and bars.

Experts say there are many factors conspiring to make gay and bisexual black youth the new face of the HIV epidemic, from poverty to lack of healthcare to the scarcity of prevention programs targeting African-Americans. But King and other experts say another big factor is the huge stigma that being gay carries in the black community.

Many black youth are afraid to come out to their parents, and parents often sweep the issue under the rug, King said.

“With parents, the challenge is often that they can’t get past, ‘my child is gay,'” King said. That makes it more likely their kids will engage in unsafe sex, contract HIV, hide their status and delay or forego treatment, he said. And those factors make it more likely they’ll pass the virus on. King said he sees this all the time.

Gay and bisexual black men are a tiny percentage of the U.S. population. But they account for close to one fourth of the nation’s roughly 50,000 new HIV infections each year, according to the Centers for Disease Control and Prevention. Among those, nearly half are teens and young adults, and their share is growing each year.

King said that’s why his billboard addresses black parents directly: to encourage those with children they know or suspect to be gay or bisexual to talk about HIV and safe sex.

But his billboard’s message is so direct that others who work to stem HIV in L.A. fear it could backfire.

“I understand the message and the in-your-face approach, but I felt that it just set us back,” said Armond Anderson-Bell, a mentor with the Ovahness Young Men’s Leadership Program at Reach LA, another nonprofit that works with young black gay men. “Because not everyone is up to speed.”

Many young black gays have been kicked out of their homes by intolerant parents, Anderson-Bell said. And he fears the billboard’s emphasis on such a grim statistic without any context about the problem or how black parents can address it could help perpetuate, rather break down, the stigma.

“You’re trying to start the conversation, but then what is the aftermath? Because you’re not there when this person gets kicked out of their home,” he said.

Ricky Rosales, the city of L.A.’s AIDS coordinator, said he agrees that including more information could have improved the billboard.

“So that people don’t just see this and are like, ‘so what do I do now? Should I have a conversation with my son and ask him if he’s gay? Or ask him if he has HIV?'” Rosales said.

But Aaron Howard, a 26-year-old African-American man who has been HIV positive for five years, said he appreciates the billboard. He said the first time he drove by it, he was shocked to see such a sensitive issue laid bare.

Before his diagnosis, Howard’s said his homosexuality had been a touchy issue in his family, and until he was infected, they never talked about HIV, even though his aunt had died of complications from AIDS. He didn’t tell his mother about his own diagnosis for three months.

But Howard said he recently showed her the billboard.

“She said she wished she would have saw it before, so therefore she would’ve been able to have an effective conversation with me,” he said.

Howard – who has gotten his HIV under control with medication – wonders whether he could have avoided becoming infected in the first place if his family had been more open about how AIDS had killed his aunt.

Howard’s interaction with his mother is the kind of change in family dynamics Jeffrey King is hoping his billboard will make.

“The norm should be, ‘Mom, I’m sick.’ And mom should say, ‘Well baby, let’s get together and go to the hospital,'” King said. And if the doctor diagnoses HIV, “Mom should say, ‘doctor, what do we need to do to take care of this?’ That should be the norm if some kid should find himself in that type of situation.

And more young gay black men are finding themselves in that situation all the time,” King said.

Be the first to start a conversation